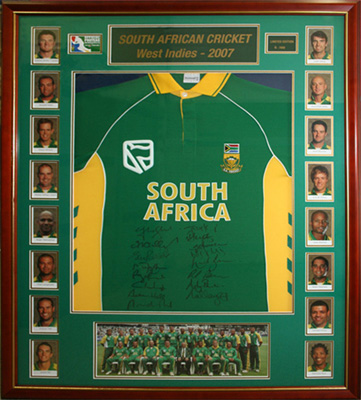 This is a framed and signed official South African One Day International shirt. The shirt has been signed by all 15 players and the South African coach that represented South Africa in the West Indies. The piece is fully endorsed by Cricket South Africa and comes with their official Certificate of Authenticity.

There are only 400 worldwide and they have been professionally framed and the piece includes individual headshots of each Player and the Coach, as well as a team photo in their one day international kit. The piece also includes the official Cricket South Africa Logo.

There are a number of players in this squad that have already retired including Andrew Hall and Shaun Pollock. Shaun is the leading wicket taker for South Africa in both Test Cricket and One Day Cricket and this is the last and only officially endorsed signed piece of memorabilia available to be signed by Shaun. There are a number of other players that are coming to the twilight of their careers and they have all been fantastic servants to South African Cricket. This is a great opportunity to invest in a piece that will never be available again.